TL;DR: I have made my own WebGL framework, and it’s called Glii.

It’s safe to say this is the culmination of five years worth of thoughts. My debut into WebGL was in MazeMap (late 2015, I think), when I was in charge of speeding up the map rendering, after kinda giving up and submitting to mapboxl-gl-js. I tried to learn all I could, and I even created something dubbed Leaflet.GL that, sadly, after 3 or 4 full refacors, never saw the light.

Those refactors were whole mistakes. Luckily, I learned quite a lot from those mistakes.

The most important thing I learned is that WebGL was designed for C people and made by C people for C people. That means it was not designed, nor made by, nor made for, HTML people, nor JS people.

One big obvious thing to notice is that the WebGL API mimicks to perfection the OpenGL API (OpenGL ES 2.0 API, to be exact).

Another big couple things to notice (but only noticeable becuase I did some C back in my university freshman days) are:

So WebGL is a JS API port of a C API… that works with C data types/structures that are not available in JS.

In hindsight, and from the point of view of a web developer, this seems like a huge architectural oversight.

Let me remark the «from the point of view of a web developer» bit. I’m sure the folks that designed WebGL had good reasons for the design, and had time constraints, and had compatibility constraints, and a hundred other things that made the API take its form. But at this point, I bet that ease of use by JS/HTML people was not a (significant) factor.

I like to sum up that in one phrase:

As a HTML+JS person, it’s mind-bogglinly complex to get into WebGL. However, since the APIs are practically carbon copies, an OpenGL person could get into WebGL straight away - reusing formatted data (models, meshes) that can be fetched over the network and copy-pasting away chunks of C code.

Fast-forward my thoughts, and you’ll reach the conspiracy theorist part of my brain that thinks WebGL was a ploy by Google to bring 3D-ish Google Maps to Chrome and nothing else.

Anyway, another thing that makes me mad is the way WebGL tries to be object-oriented (since everything in JS is an Object that has a prototype), but fails miserably to provide any kind of object-orientation-derived convenience. Instead, we’ve got freaking pointer logic in JS.

Let me illustrate. Let’s assume we have our GL stuff initialized, get a texture, change some properties of that texture, and dump an image into it.

A HTML+JS developer would dream of a sane way to do this, which would look like:

Instead, we got this:

The prize to the most seemingly idiotic part of the API, however, goes to parameters that must be zero. From the texImage2D documentation:

border A GLint specifying the width of the border. Must be 0.

Listen, I’ve used a fair amount of APIs during my career. I’ve done UML, I’ve read design patterns, I’ve created my fair amount of documented interfaces and APIs. And if I set aside my humility for a second, I can honestly say that having a public API require a parameter, and then force the users to always, unconditionally set that parameter to zero (or any other given static value) without explaining a good reason for that parameter to exist in the first place is utterly stupid.

Y’a know, at least slap “legacy” or “reserved for future use” in there.

But yeah, the more I’ve been dabbling with WebGL over the years, the more its API has begun reeking of C. I really mean no disrespect to the architects of OpenGL ES 2.0… but at the same time I cannot help but feel the reek.

I’m not even going to comment on the death of Flash and how HTML5+WebGL has failed to appeal to non-technical people, and why all artsy game devs are using Pico8 and Unity.

There have been a number of WebGL-based framweorks over the years. The most current list I could find is in this gist by Damien Seguin, and it lists about 80 frameworks, toolkits, engines and frameworks.

And yet, none of them fulfill my needs.

Yes, it can be said that I have special needs. My WebGL career has been mostly failing to deliver Leaflet.GL, then doing all kinds of experiments on Leaflet.TileLayer.GL, failing to understand the overly complex architecture of mapbox-gl-js (now maplibre-gl-js), wondering about the OpenLayers abstractions for stitching tiles and reprojection, and creating the OpenLayers GlTiles data source (to replicate and expand the functionality of Leaflet.TileLayer.GL). This means I have a very specific set of requirements in a WebGL framework/toolkit:

… So. After lots of thinking and lots of learning from failures and a crystal-clear vision of how I wanted a WebGL API to be, and after a good couple of years worth of letting the ideas brew, I’ve done my own WebGL framework.

It’s called Glii, and I think it’s awesome. The name is homophonous with glee, because I can finally quickly prototype low-ish level GL algorithms and structures and be happy at the same time. I should create a good backronym for it, like “GL Ivan’s Interface” or something.

Remember the texture example code from before? This is how it looks in Glii right now:

It just makes sense. It wraps GL concepts in a OOP fashion; I can forget about the WebGLRenderingContext entirely (because of some clever closure bits); and since browser support for <script type=module> is mature enough, no bundling is needed.

And the preliminary UML class diagrams (generated via Leafdoc and Graphviz) are a thing of beauty IMO: 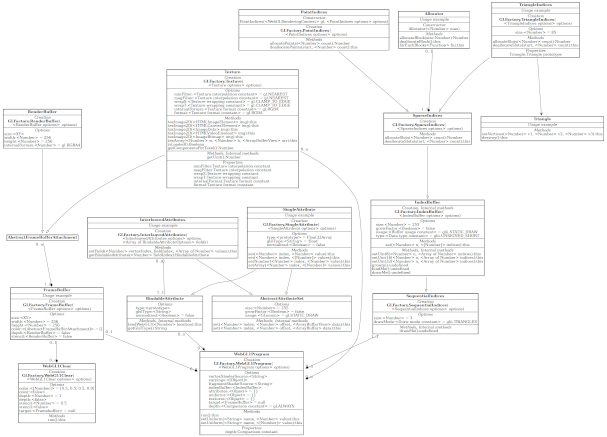 Look at it. There’s no gigantic class, there are subclasses of stuff for convenience, there’s inheritance and composition and abstract classes, and I can finally understand FrameBuffers from there.

And this is the entire code for a minimal “hello shader” webpage:

Obviously Glii has a lot of biases, and I’m taking a gamble with them. But I honestly, heartly think that prioritizing OOP encapsulation/cohesion/decoupling (thus allowing OOP-minded JS people to understand how to put GL concepts together) trumps everything else.

Glii is at https://gitlab.com/IvanSanchez/glii (even though the documentation is a bit in shambles still, the codebase has reached minimally viable maturity). I’ve been keeping that under wraps for years, and now I’m finally taking one of those wraps away.

Because WebGL should be understandable.